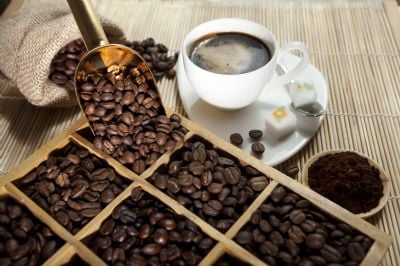 Description: Costa Rica Tarrazu is from one of the world's premiere coffee growing regions due to its volcanic soil and ideal drainage. Even though this little country can fit into the state of Texas approximately 13 times, Costa Rica’s reputation for producing some of the best coffee in the world far exceeds its borders. Costa Rica boasts eight coffee growing regions, the most famous of which is Tarrazú. This region is known worldwide for its fine-quality beans and breathtaking views.

The Tarrazu region is located in the interior mountains of Costa Rica and is known to produce a highly popular and distinguished coffee. Tarrazu is a market name for coffees produced and processed within the region. Coffee from this area is known to be relatively heavy-bodied with a complex aroma. About a two-hour drive from San Jose, Tarrazú is filled with roads and coffee plantations that wind around the mountainside. The area is lush with vegetation, and a large number of tropical birds.

A year in Tarrazú is split into two well-defined seasons, rainy and dry. The rainy season lasts for seven months (May to November), during which time coffee plants are growing; the dry season is from December to April. Harvest time is a five-month period from November to March that coincides nicely with dry season. This well-defined climate pattern is ideal for growing coffee and results in high-quality coffee cherries that are uniform in ripeness.

Many of the coffee beans in the Tarrazu region are known as “Strictly Hard Beans” (SHB) – a high grade designation given to coffee beans. It is estimated that 95% of the beans in the Costa Rica Tarrazu region are in the SHB category. This is due to the fact that they are grown above 1,200 meters above sea level. The higher the altitude, the slower the maturation process of the bean. The slower the beans mature, the harder and denser they become. The harder and denser they become, the more consistent the bean is which allows for a more even roast. And the more even the roast, the better the cup of coffee. Don’t you want to try a cup of this fabulous coffee?

Region: The Tarrazu region located in the interior mountains of Costa Rica