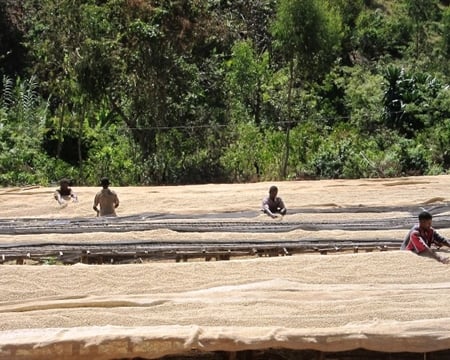 Description: This coffee is a product of the Sidama coffee Farmers Cooperative Union. Sidama is a large coffee growth region in the South. In Sidama, coffee is grown near homesteads and is planted at low densities, ranging from 1,000 to 1,800 plants per hectare. Widely practice the garden coffee production system and are fertilized with organic nutrients.

Among coffee-producing countries, Ethiopia is most often spoken of as the “birthplace” of Arabica coffee. Unlike the vast majority of coffee-growing countries, the plant was not introduced as a cash crop through colonization. Instead, growing, processing, and drinking coffee is part of the everyday way of life. The trees were discovered growing wild in forests and eventually cultivated for household use and commercial sale. Ethiopia’s coffee production is unique in that its domestic consumption is very high, having a significant role in the daily lives of Ethiopians: About half of the country’s 6.5-million-bag annual production is consumed at home, with roughly 3.5 million bags exported.

Coffee is commonly enjoyed as part of a “ceremonial” preparation, a way of gathering family and friends around a table. The senior-most woman of the household will roast the coffee in a pan and grind it fresh before mixing it with hot water in a brewing pot called a jebena. She serves the strong liquid in small cups, then adds fresh boiling water to brew the coffee two more times. The process takes about an hour from start to finish, and is considered a regular show of hospitality and society.

The majority of Ethiopia’s farmers are smallholders and sustenance farmers, with less than 1 hectare of land apiece.